My husband and I made a movie.

« Read the prologue to the Emissary novel (I would love feedback!) | Main

Detailed synopsis for book 1 of the Emissary trilogy 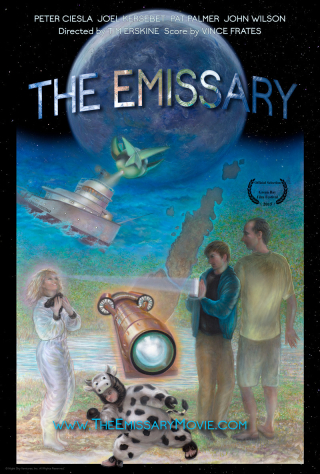 Poster art by Ram Rojas, for The Emissary, a movie that I helped create and produce, and on which my books are based.

Synopsis for book one: The Emissary and the Time Bomb from Outer Space

Living on Wisconsin’s scenic Door County peninsula, engineer Jim Morgen isn’t expecting a visitor from outer space. He is also unaware that in two days, without intervention, a lost alien artifact—lost during the sinking of the Edmund Fitzgerald—will blow up his popular tourist community. Jim expects instead to grapple with three simpler problems:

First, Jim wants to help his disabled brother. Andy is an improvisational genius. But Andy is also afflicted with a compulsion to mimic people when he gets scared, a compulsion that often escalates conflict between Andy and those who scare him. Andy’s obsession with wearing costumes further complicates his quest for stable employment and romance.

Second, Jim longs to share with his best friend a new passion: meditation. Mark Fitzpatrick is generous and goofy, but more worried about salvaging his failing independent bookstore than learning mindfulness techniques from Jim. Mark and his tech-savvy wife Sue long for children, but feel stuck rescuing their bookstore.

And third, Jim wants to ask the new librarian out on a date. But Molly Combs is not who Jim thinks she is.

A PhD candidate in electrochemistry, Molly is in town only because her advisor insisted she take time away from her Madison lab to finish her thesis on a bionic leaf invention. Molly likes Jim, but she’s torn. Wary of romantic distractions, she avoids telling Jim that she took the library job on a whim and is working as a temp. Molly confides in her best friend Sue her worries about maintaining a long-distance relationship after she returns to Madison. Sue fails to realize that Molly’s unnamed “library guy” is Jim, her husband Mark’s best friend.

Meanwhile, bad-tempered, overbearing dairy farmer Stew Wafflequisp is furious. The strange, secret machine he inherited from his late father has provided decades of unlimited power to their now-wealthy farm. Stew never had a clue how it worked, but assumed it always would. But now it seems to be breaking down. It’s causing blackouts, sounding alarms and displaying creepy animations that resemble explosions.

After roping his long-abused farmhand Pascal Fourier into masking the generator’s warnings, Stew pitches its sale to Effuflux Energy CEO Billy Sinclair. Learning Stew’s generator delivers limitless power, Billy schemes to steal it, pretending to befriend the gullible Stew. Stew connives to use Billy’s promised funds to convert his farm into a factory farm. He covets a neighboring factory farm’s apparent success, disregarding clues that its toxic runoff is making him ill.

Stew’s quiet, philosophical farmhand Pascal fears his beloved cows will suffer if Stew gets his factory farm. Pascal knows Stew will fire him as soon as he sells the generator.

Having arm-twisted Mark and Andy into a sunset meditation hike, Jim is elated to share his wisdom. But deep in the woods, the trio are terrified by a spaceship landing. Koyper, the spaceship’s pilot, is a benevolent bioprospector from a secret, ancient space colony. His colony just received an emergency signal from a long-lost spaceship power generator. Koyper recruits the three men on his mission to find and disable the generator before it blows up in two days.

Koyper’s mysterious calming influence on Andy gives Jim hope that Andy’s disability might be curable after all. And in counseling Mark on managing the terror of their new situation, Koyper plants a seed for how Mark might revive his bookstore business.

Jim realizes that Koyper’s mindfulness far exceeds his own. In fact, Jim grows alarmed that Koyper insists on spending so much time relishing Earth’s treasures while so much is at stake. Even so, Jim resolves to trust the spaceman.

Together, they start their search for the bomb.