« Updated catnip chapter from my book, Herbs Demystified | Main | Why does our spaceman forage? »

In celebration of my favorite planet

In celebration of Earth day, here's a wee snippet from my novel, The Emissary, currently undergoing editing by some wise and extraordinarily kind Earthlings. 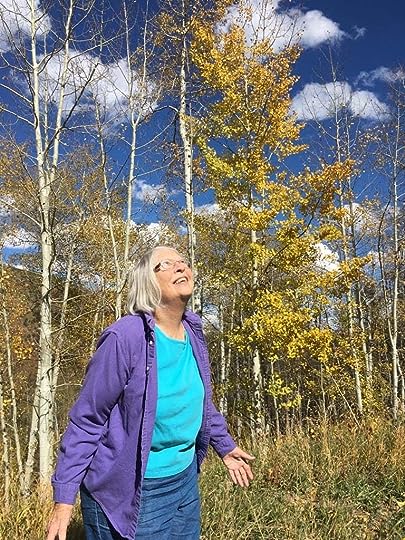 My mother Judy Wadyko, prior to her move to Wisconsin, walking through the Colorado aspens.

“But… what about alien technology…I mean, it must be so incredible…” Jim's hands reached out as he grasped for the right words. He pictured his childhood book illustrations of rocket ships and space stations. Why couldn’t Koyper understand what he meant?

Koyper pinched something off his plate and held it up. “See this?”

Jim squinted at the object in the dim firelight. It was a mint leaf. He knew the sprig had come from his front yard. It was one of many unwanted sprigs. He had trouble controlling all the peppermint growing around his pond. But he did like to bring a portion of it inside for use in salads and cooking.

“The highest technology that we know of in your entire solar system grows only on this one planet, Earth. It is in life.” Koyper spoke slowly and emphatically, shaking his mint as he spoke. “This is high tech.”

“High tech mint…” Andy mumbled tiredly from the recesses of the cushions of his recliner and closed his eyes. He seemed on the verge of conking out.

“Okay…” Jim frowned and rested his chin on his hands. “So living cells teach your colony how to recycle.”

“Cells have mastered it. And energy. And efficiency. And building materials. Cells have worked on these problems for billions of years and when they don’t get it right they pay for it with extinction. Humans…” Koyper shrugged, raising his palms upward. “Humans have only had thousands of years trying to solve the same problems. So there is no contest.”

Jim tried to figure out why he felt disappointed. He felt like he was missing something. “But your aliens…I mean…don’t your aliens have some sort of special…” He twirled his hands around each other. What were the right words? He felt stupid. Aliens always had superior technology. Because they were aliens.

“We were just talking about the value of limitations,” Koyper said. “The other side of limitations is to diversify as much as possible, even under limitations. To not put identical eggs inside one bucket.”

“You mean, don’t put all your eggs in one basket. Don’t commit all your resources to one venture.”

“Yes, this is a clear lesson nature teaches. Diversity and complexity are required for survival.”