I'm not normal. I come in peace. Here I write about my synesthesia, and neurodiversity in general.

« About my synesthesia | Main | Do you have perpetual brain music? »

How Fantasia let me down 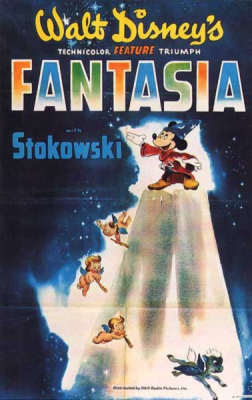 I do remember being told that our family was going to see Disney's Fantasia at our La Habra theater in Los Angeles, I must have been around four or five in the late sixties. I was told that for the first time, this film was created so the music would match what you saw! Well, it was about time! I thought. I just could not wait to see this.
I remember sitting in the theater waiting for the movie to start, and being so excited. Finally! I really could not understand why this had not been done before. Even as young as I was, I felt, surely there is a great need for everyone to see on screen the same thing that you are hearing!
I watched and watched and watched, and there were little cartoons of hippopotamuses, and of Mickey Mouse, and even of a symphony playing, but during the whole movie, I could not find even one tiny instance where the music was being matched by any colored shapes on the screen. Did I miss it? I was so confused! I asked several times afterwards, where was the part when the music matched the colors? I did not see it! That was when I started to feel a bit alone.
Laser show disappointment

Griffith Park Observatory, a locus of inspiration and disappointment, but mostly inspiration for my nine-year old self

I had a similar experience going to Griffith Park Observatory, which always simply thrilled me. Such a magnificent setting, and all this exciting science going on, too! Going there when I was young helped drive me to teach astronomy later in life. I cherish my memories of going to this magnificent spot of learning. I must have been about nine, and we were going to a new thing called a laser show at the planetarium there. Again, I was promised that the laser lights would match the music being played. I had the same well it is about time! feeling and excited anticipation of finally seeing what I knew was there when hearing the music.
This was even more disappointing, because many abstract shapes and colors were portrayed by these lasers along with music, but none of them were even remotely like what the music looked like to me! I felt like I was on some alien planet. Crushed! Disoriented, I might have complained a little afterwards, but I think I was learning that for whatever reason, people just did not talk about this or understand what I was talking about. And so I stopped thinking about it, over the years.
Later in life I was delighted to work in a planetarium, and even put on my own laser shows, but these were "canned" shows that were pre-programmed with someone else's effects. I knew by then that no one expected the music to match the colored shapes.
Now I know that not even other synesthetes perceive what I perceive, that we all live in our own little universes. While that can feel lonely at times, I like to think that remembering that we are all wired a little differently helps me feel more respect and compassion for people who don't see things just the way I do.

Posted at 04:10 PM in synesthesia | Permalink