I'm not normal. I come in peace. Here I write about my synesthesia, and neurodiversity in general.

Main | About my synesthesia »

Hi, I stumbled across your site today.  I found out I had synaesthesia a couple of years ago, and from time to time I search the net to find out more about it.  My synny thing is that motion, colour and light also makes sound.  I also have taste and smell for a lot of things, (mostly words) but primarily the movement and sound is predominant. Driving down the road is a rythmical, musical experience, and I always see/hear people and animals on the road quicker than anybody else, as I hear them.  That has saved many a cat's life.

It seems most synnies have the colour with letters etc,(I don't have that at all)  but I'm trying to find out more about my specific type, which is movement creates sound.  It's also related to light and colour, because intense colours in movement make different sounds than say a screen-saver of soft white blobs on a black screen.  It's also a dimensional thing, as music is three dimensional.

I'm a musician, a singer songwriter, and I can't really listen to music that often, as it drives me nuts.  I have to sit down and listen to it, background music is extremely disturbing, and I am also very sensitive to new sounds, sounds I don't know the origin of.  I read you had something similar?  Could it have to do with the 3D experience?  That it's a sort of sensory overload?  Listening to the radio/music in the car is the absolute worst.  It makes me agitated.

I have been learning music theory and to read music for the last 4 years, and find it extremely difficult, the notes swim and the mathematical constructions just take forever to sink in.  Some of my teachers call it musical dyslexia.  For me, it is more illogical to read music, as it it seems abstract. Flat. I see/hear the notes and espcially chords as shapes, constructions.  Hard to explain.  I am slowly learning however, and it is helpful to my music, as it is much easier to explain and make arrangements for musicians various projects.  So I'd like to find out more about my specific type of synaesthesia, as I think it might help. Below is a link to myspace and my music. Although I understand if you don't listen to it.  :)  I hope you can help me with some synnie info.

Well, the first thing I thought when I read your message was, you poor man. I find it distracting enough to drive down the road with music in the car without motion-related synesthesia. I do have to turn off the radio before making a left turn. Pretty much always.

I HATE anything moving in my peripheral vision, especially ceiling fans (I feel like I am in a giant blender) and often have to shield my eyes or wear a hat. But motion does not give me sound. Peripheral vision motion only makes feel me like a predator is about to disembowel me, is all. When startled by motion, I scream involuntarily. A lot. I hate it. My husband hates it. I wish I didn't have that startle-scream problem. It takes me a while to calm down after.

I only just recently read about your type of motion-related synesthesia in the my favorite New Scientist Magazine, and they have a test for it here, which you probably don't need to take except to amuse yourself:

I get so many emails about synesthesia now from other "synnies", as you call them. Your motion synesthesia is definitely more rare, although I have heard from others who have it as well.

I relate about struggling to read music. I sympathize. But I write to say that there is hope for you to read music automatically, should you really want to. I think the trick is to translate the music into a form you can interpret. For me, that is color.

Long ago, before I went into the easier fields of chemistry and biology, I started out as a music major in college. But I felt like a fake. I realized I was in way over my head.

I was a 17 year old music major, and I felt like a musical fake because I only just was able to duplicate what I heard on piano and harp, and it was all I could do to interpret reading those damn little black dots that mean notes. I would feel like squinting and staring and at those lines and dots, and never trusted they were what I worked them out to be according to the rules I was told.

Yet all the other music majors were so hard-working, practiced (I never practiced, being youthfully arrogant and lazy) and they COULD read music, many of them quite well.

Every time I genuinely tried to make reading music automatic, I felt--as you say--dyslexic! Dizzy and irritated! So I went into science, which was so much easier.

But now I have to report that I have a breakthrough. I am now starting to--relatively quickly--read music. I started playing piano at 7, now I am 44, and only now reading music automatically. About time.

I only recently realized the problem, at least for me, was that I could not imagine this:
How can BLACK DOTS mean notes? They all look the same. They are all black dots on a page. Your job it make them NOT black dots. Buy seven highlighter pens in different colors.

It does not matter if you do not associate a specific color with a certain note. You can FORCE yourself to do this. I firmly believe that if you practice something enough, you WILL learn it. 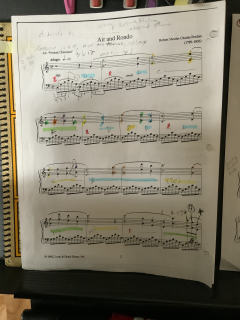 How I colorify my music so I can read it.

I have had an old association with notes and colors, but it was, for the longest time, unhelpful, since it is not the same as my synesthetic alphabet. It also does not match what I see on my major instrument, a large Celtic lever harp, in which harp makers color the strings (red harp strings are C, blue harp strings are F on all nylon strung harps.)

I had to compromise and force myself to create new associations for some notes which I just felt initially were "wrong" but have since forced myself to connect in my mind. The key is to be consistent.

My old associations with colored notes actually follows my number scale, with C being 1, D being 2, E being 3, F being 4, etc. So, since my number 1 is black, the musical note C is conceptually black for me, even though the letter C is yellow for me. This is especially confusing playing the harp, because on a harp, nylon C strings really are colored red, which was just completely wrong in my head.

For me, the musical concept of F relates to the number four, which is a red number in my mind. And on a harp the F strings are colored Blue! And in my synesthetic alphabet F is pale green. No wonder I would get confused. I forced myself to compromise and decided that from now on, F on the harp would be pale green. It is at least CLOSE in hue to the blue of the string.

Anyway, you don't have to understand all of my personal associations. What I did decide to do was to FORCE myself to associate a color with each note and to do that consistently.

So, one night, about 6 months ago, I got out seven highlighter pens of all different colors. And I sat down and made myself decide on the best compromise--for me--what each note should be from now on. I wasn't sure that I could do this, because I have never had synesthetic perceptions change. Never. My synesthetic alphabet has always been the same color.

Here are are my new rules for notes

C--Red (because harp strings that are C are red--this means I have had to force myself to not think of it as black as I have in the past.)
D--blue (Like the number 2, however, it can be confusing because blue strings on the harp are F's--I just try to ignore that)
E--yellow
F--pale green (a compromise since F strings are colored blue on the harp, it is at least close. But I can't imagine musical D not being blue.
G--orange
A--purple (in my head a musical A used to be reddish brown, because the letter A is red and the number six is brown, so purple seemed a good compromise for reddish brown)
B--grey or silver

I don't know how you'd do this on other instruments, but I bought 46 hairbands, for pony tails, in these 7 different colors. Then I wrapped them around every single lever of my harp (I have a sharping lever above every string). It drives my harp teacher nuts that I associate green with my blue colored F strings but she is very understanding.

Then I would take out some music and highlight with the pens the more problematic notes that I had trouble recognizing with my color code.

Now when I play, I can start to see the notes as colored on the page without highlighting them, and I know what they are and can play them quickly. I'm still more hesitant than I would like, but I can pull out a fresh piece of sheet music and play it. Being confronted with a new piece of sheet music used to make my stomach flip flop in dread. Now it feels fun.

The key was to allow myself to break some of my old rules about what color things should be. That is hard but you can do it, and it is worth doing to read music. I won't say it is automatic and easy yet, but it is a whole new world finally opened up to me. I hope this can help others with "musical dyslexia", which is a horrible, frustrating thing to have.

All the best to you and your music!