Who writes lists on old-fashioned paper? We do! Movie-making, fiction-writing, programming, musical editing...a lot of what my husband Tim and I do requires lists.

Just for our movie we have the following:

Research backs up the notion that paper list-making helps your memory. Even if you never glance at your list again.

The predominantly digital nature of our pet beast that we call The Emissary Movie has forced us into ambivalent reliance on multiple software tools, I'll admit. But when it comes to remembering things that must be done right away, nothing beats a paper note. Thrust into your modern cell phone-gripping hands are bedazzling digital toolkits promising to help you jog your memory. Yet if paper notes are dying, they are treating their loyal fans to a complex and lengthy swan song. Perhaps this is because paper notes work. 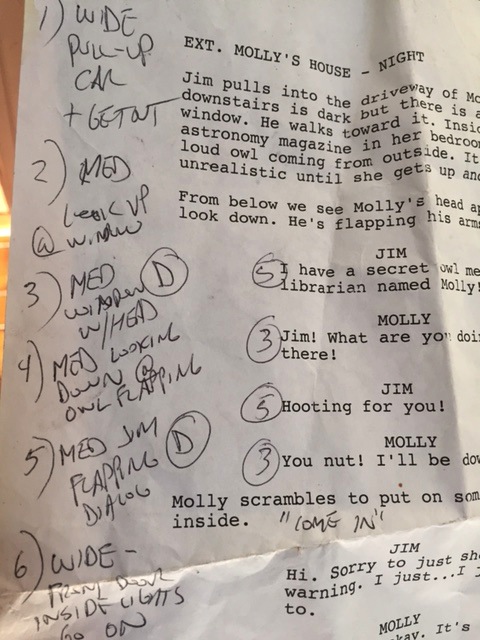 Camera notes for The Emissary Movie

Is there an advantage to writing longhand, the old fashioned way, to jotting notes on a computer? A 2014 study says yes ! Even if you never even glimpse your paper list again, you misplace it, the dog eats it, or it softly biodegrades into the damp, murky depths of your purse, you will remember what you wrote better if you write it down the hard way.

I like how this study cleverly investigated the mechanism behind this. One discovery that emerged was that the seeming advantage of writing quickly was actually a disadvantage, at least in terms of remembering what you wrote. Let me say that more clearly. Fast is bad. Slow is good. If you want to remember what you are writing, write the slow way.

Copying and writing verbatim isn't all bad. It has it's place. I like to make my beginning chemistry students copy chemical structures quite a bit, so that their molecules conform to the rules of nature and don't look silly (hydrogens with more than one bond or bonds going to nowhere is silly, for example.) But students ought to be able to draw their own molecules after a while without copying. At first they look at me with worried eyes and ask, is it okay to copy?

Training wheels, I tell them, and for now, yes. Copying is helpful up to a point, and it is not a bad thing to do, but eventually you should be able to improvise after you use copying to learn how it is done properly or to learn the rules of what you are mimicking. I love to try to copy musical pieces I like, but then the fun part is in playing with them once you see how they work. So, (I say to myself) John Williams' Harry Potter theme gets all chromatically with the minor second and augmented fourth eh? Let's play with that and see if we can get the same tone...there is something to be said for imitating, and then improvising.

Memory in note-taking appears to be down to processing. The more you are forced to think when you make a note, the better you will remember it. I would add that the more senses you can add, the better. Speak it out loud. Sing it! Make a cartoon. Write it down with your non-dominant hand.

I once knew a man who sang his grocery list. It was an immutable list, of course, but he'd created such a catchy tune that I inadvertently memorized it myself. Unfortunately, it isn't so useful for me, but I can still sing his list: Bread butter milk eggs cheese coffee pepper! Salt tea mayo, veggies and toilet paper! I should come up with my own version.

Taking notes on a computer or equivalent, shiny rectangle during meetings or in classes is increasingly common. If you don't have time to process what you are hearing while you take notes, you may as well record it to listen to later when you do have time, and then write longhand notes, along with your own thoughts.

I used to write in my textbooks during my way-too-many-years (fourteen) in college and graduate school. I remain convinced this helped me remember. I can still even picture some of the pages of the text books that I wrote on, whether it was the left page, right page, and the place on the page, mainly because of the odd things I wrote.

I strongly recommend writing something funny or simply bizarre, right in your textbook or whatever you are reading. It will enhance your memory, and improve the value of your reference to future readers, I like to think.

Here's an actual example from my old beloved botany text, back from when I was a 17-year old Freshman at Slippery Rock University and studying under Dr Thomas Gaither: 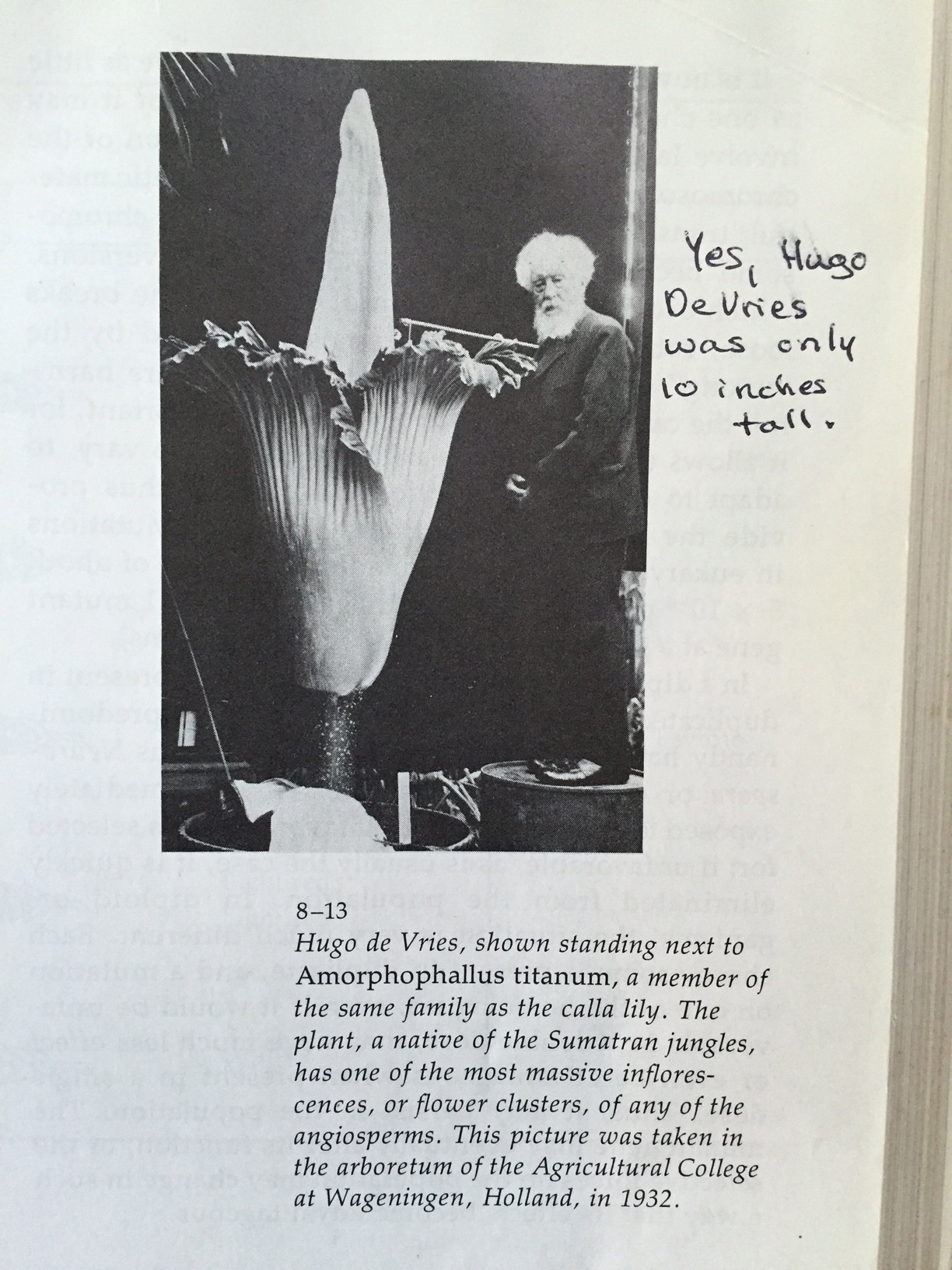 And to this day, every time I hear about histones (proteins covering DNA and modifying their expression) I can never forget my note in my Stryer's Biochemistry, written in a desperate attempt to remember along with so many other things I was learning, what the darn things were: 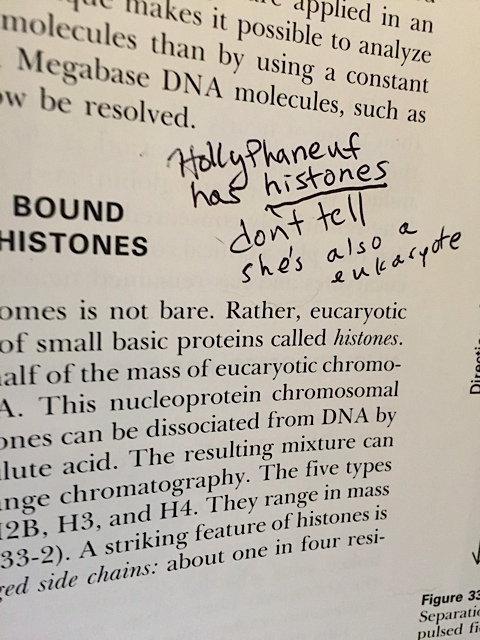 I will always remember what a histone is, thanks to this silly note I made ages ago.

I found that underlining didn't do much for me, though I did my share of that. It doesn't involve much processing compared to using actual words. Perhaps the naughty adrenaline rush of defacing a text enhances memory as well. I am guessing that adding pictures would be even better. Imagine how entertaining it will be for someone else to see your cartoons!

The study discovered that writing on a computer freed the participant's fingers to act as a sort of mindless tape recorder, apparently independent of their brain's processing what they were typing. When participants typed verbatim what they heard, they remembered the least.

When participants were asked to type but were encouraged to paraphrase as much as possible, they remembered more.

And when they were asked to write longhand, their memories for what they wrote were the keenest, especially if they were encouraged to paraphrase.

Ironically, in reading the study that inspired this article, I made notes. In the margins, longhand. 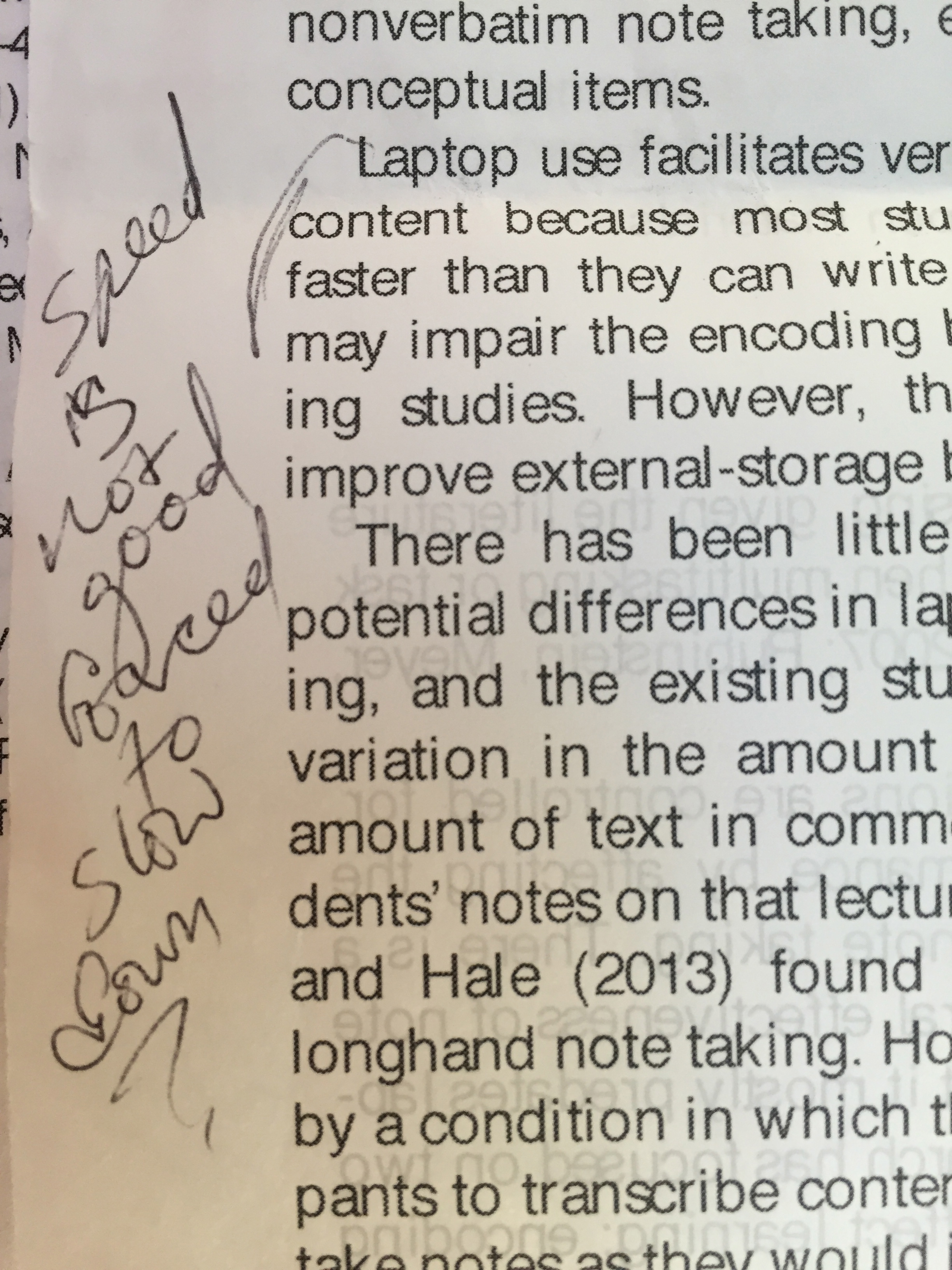 so that's why these dumb software reminders are not working for me. I have tried so many. I just forget they are there after a while. I'm going back to postit notes.

They don't work for me either, Angel! My husband keeps thinking he has to buy the Perfect Software in order for that to work. I think the problem isn't with the software itself. To his credit he also carries around a giant notebook where he hand writes all his thoughts and reminders. Now THAT actually works and he's been doing that for years.