« Why not have a nice chat with your inner monsters? | Main | Giving Up Epiphanies For Everyday Workouts »

Smell for your life

Note: I wrote this before the Covid-19 pandemic. Most of us now are keenly aware that the virus that causes Covid-19 often damages the brain's olfactory bulb, causing anosmia, a loss of smell and taste. Prior to the Covid-19 pandemic, researchers were alarmed to learn that anosmia was associated with all-cause mortality in a way we still don't quite understand.

Now, more than ever, there is interest and encouraging research in smell training as treatment for anosmia. When I visited my mother in her nursing home--she had dementia--I often let her sniff different scents I brought along, just to see how she would react. I liked to think it was helping with the upkeep of her mental map of fragrances. She enjoyed the stimulation, I could tell.

Here is my original article:

My cats often appear convinced that I am handling something they need, and they are wrong. "It's just tomatoes," I tell them, after I've opened a can. They don't believe me. And sometimes, to convince them, I oblige them. I let them sniff my can of tomatoes or beans or artichokes or whatever it is that isn't cat food. Rather than turn aside, however, they sniff, sniff, sniff! Just long enough for me to get a little impatient with whatever mysterious, extended thought process they are experiencing. They are interested, even intrigued, if not a bit let down. 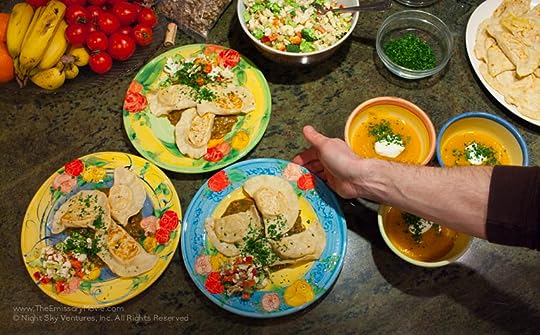 Koyper the spaceman cooks pierogis from scratch in The Emissary movie - I expanded this idea in my novel so that our wise spaceman trains his friends how to tune in to and juggle all their senses including smell and taste.

I feel I am doing my cats a favor when I let them smell whatever it is that I am working with. I'm helping their brains grow, I think. If I had young children, I would try to train them to recognize different smells, for the same reason. Refining their brain map for scents.

When I was an undergraduate, we were taught that adult brain cell growth was impossible. We now know that there are two brain regions that may be able to grow new nerve cells in the adult brain. One is the olfactory bulb, your smelling apparatus, and the other is a zone in your hippocampus, a memory-cementing area. (Update from 2022: there has been some walking back on that idea just recently based on new research looking at mRNA expression from brain cells. I hope we can grow new brain cells.)

In both areas, neural stem cell development proceeds similarly, in that this neurogenesis requires the right stimulus. Stress hormones like cortisol squelch processes that support nerve cell upkeep. In other words, continuous, long-term stress doesn't just feel rotten, it causes brain damage. Short-term stressors like exercise on the other hand stimulate brain cell growth. Like exercise, learning new smells stimulates nerve cell development in the olfactory bulb, which is part of your brain. And there are good reasons why you might want to strengthen your sniffer.

Over the years, I've run across several research studies linking the loss of the sense of smell (anosmia) to neurodegenerative conditions such as schizophrenia,
Parkinson's,
and  Alzheimer's.

In fact, people are developing various smell tests to help with early diagnosis. A couple years back, a much-popularized study suggested the ability to
smell peanut butter could be used to diagnose Alzheimer's, for example. This test still needs refinement,

But peanut butter is less expensive than a 3,000 dollar PET scan and plus it is more delicious.

This research troubled me. I used to joke, "I don't smell good." Schizophrenia and dementia affect my family, too. Though I am, so far, unscathed, I want to stay that way.

Maybe it was all the years I spent hanging out with vats of pyridine. I must explain that pyridine is hateful stuff. It smells SO BAD. Evil bad. Turds of Satan bad.

I tried desperately to find any solvent besides pyridine that would dissolve my two reactants without producing a side-reaction. No luck. I was stuck using pyridine. Besides causing liver cancer and sterility, pyridine, the slightest whiff, would cause me to immediately dry retch. I was very careful with hood venting but still would catch a whiff here and there, it was unavoidable. I also was required to use loads of sulfurous reducing agents
in doing antioxidant research. (This was usually beta-mercaptoethanol, the same stinky stuff that is used to warn us of otherwise odorless gas leaks. Compared to pyridine, mercaptans are downright lovely.)

Could my working with these smelly chemicals have burned out my smeller? Is that even possible? Friends discussed odors I could not detect. Wine notes they found remarkable stayed mute to me. So did suspicious odors in the fridge, according to Tim. This makes you feel insecure in a public setting. The studies linking anosmia to neurodegeneration added yet another layer of worry for me.

Then a really worrisome and fascinating study came out in 2014. The title says it all:

For whatever reason--they don't know the mechanism--loss of smell is strongly correlated to all-cause mortality. They scored 2,918 adults for their ability to smell five odors: rose, leather, orange, fish, and peppermint. People with the the worst scores were most likely to die in the next five years. (And yes, they statistically corrected for unhealthy behaviors that knock out your ability to smell, like smoking and heavy drinking.)

People with intermediate scores were moderately more likely to die, and people with the best scores lived the longest. But what rocked everyone's boat about this particular study was that this simple smell test proved a more reliable predictor than standard biomarkers of health, like the presence of cancer, lung disease, cardiovascular disease, stroke, diabetes, and liver disease.

The authors concluded that loss of smell did not cause mortality, but that anosmia was a "canary in the coal mine" signaling some other unknown degenerative process.

Another more recent article also points out that loss of the sense of smell is linked to a malfunctioning immune system, at least in mice. Something is going on here. We need to listen to our noses.

You probably are now wondering: Can training your odor awareness reverse this degenerative process?

What if you were to choose from a random assortment of scents, blindfolded, on a daily basis, and quiz yourself on what you were smelling? Can we strengthen our smell cognition? YES.

"Olfractory training" or smell therapy is now being used for people with anosmia with some good success.

And could this improved olfactory cognition make us healthier? That answer is up in the air along with those smells.

What if we woke up and really smelled our coffees? Inhaled the odor of our meal appreciatively before chowing down?  I like therapies like this, that can't hurt and might help.

I have not been deliberate about it, but I keep testing myself off and on, for years now, when it occurs to me. I'll pick up some bar soap, essential oil, or a candle, plant leaf, blind, and quiz myself. What does this smell like? Even with my extremely lazy attempt at smell therapy, I have good news: I smell good again!

Perhaps my meditating also helped. I tell people that I have been sitting 20 minutes a day for almost three years now, which means I actually manage
to do this every other day.

In between having distracting thoughts, which are normal, I notice everything. Smells, the rise and fall of my breath, the
stupid itch on my butt, everything. Lately, I find I am intensely aware of homey scents, dinner cooking, piney woodsy air. I don't know how this happened, but I think it is a good sign. I certainly am enjoying the richness of my new sensory world.

Please step away from the air poisoners, I mean fresheners. I think that whole industry of scenting your house with what is known to be harmful volatiles needs to be shut down, but that's a different essay. One way to keep your air fresh is to not add more random molecules to it.

If you want to try your own smell therapy, please don't go overboard with exposing yourself to scents. My gut sense is this is the olfactory equivalent of blinding yourself by looking at the sun, and does more harm than good.

I think it's important that we don't continuously bathe ourselves in a new smell, such as scent diffusing plug-ins, candles, perfume, and incense. When a signal is continuous, you tune it out. It becomes invisible, meaningless.

If you are going to train yourself, I'd use brief, intermittent encounters.Then pair your encounter with a conclusion: if this smell had a temperature, or a color, what would it be? Is it cool, warm, earthy, fruity, citrusy, rank, woodsy, flowery, or what? Does it paint an image for you? Your conclusion will engage the memory center of your brain, as well as the olfactory
region.

Why not stimulate both purported brain-cell-growing zones, at once?
I'd love to know what you think.