To my surprise, I wrote a 300,000 (or so) word trilogy. I'm now tightening, editing, and being edited. Here's what I have learned, so far, about writing fiction, or, as I think of it, lies that are true.

« Do these titles make my books look big? (Would love feedback!) | Main | A more detailed synopsis for Emissary Book 1 »

Synopsis for my solarpunk trilogy

I'm writing a synopsis of my novel for an agent query letter. It's going to go something like this:
CHARACTER was STATUS until INCIDENT and now he must GOAL or else CONSEQUENCE.
How's this:
Living on the scenic peninsula of Door County, Wisconsin, engineer Jim Morgen isn’t expecting a visitor from outer space. He expects to grapple with three simpler problems. First, he wants to help his disabled brother Andy overcome an urge to mimic others and wear costumes. Second, Jim longs to share with Mark, his tolerant best friend and owner of a failing independent bookstore, his latest passion: meditation. And third, Jim wants to ask the new librarian out on a date, though he has yet to learn that she’s actually a research scientist whose coworker is jeopardizing her bionic leaf invention.
But after Jim coerces Mark and Andy into a wilderness meditation hike, his life is upended. The terrified trio witness a spaceship land. The spaceship’s occupant, a wise and benevolent bioprospector from a mysterious space colony, recruits the three men for an urgent mission. Together they must find a lost alien device—lost during the sinking of the Edmund Fitzgerald—before the it blows up their entire peninsula. Factory farms and and a greedy energy executive threaten the dairy farm where this device has secretly been used for decades as an unlimited power source. Jim, Andy, Mark and the spaceman have just two days to find and disable the lost device or the entire peninsula will be destroyed.
The complete 100,000-word manuscript for The Emissary and the Time Bomb from Outer Space can stand alone or be followed by my similar-length completed works The Emissary and the Clue in the Cheese Curds and The Emissary and Mindful Approaches to Everything Possibly Exploding. 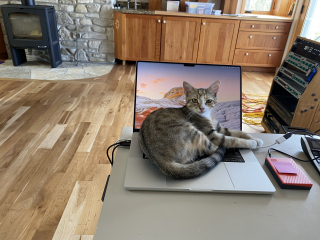 Booster loves this heated cat bed. But it's overpriced.

Sounds like fun. My husband and I saw your movie at the Skyway drive in and loved it!! How much does your book follow your movie?

I love it! But now I have so many questions! How did a device lost during the sinking of a ship in Lake Superior end up on a peninsula in Lake Michigan? And why did Jim coerce Mark and Andy to go on the hike but not the librarian? The connection with the Edmund Fitzgerald is intriguing and it’s refreshing to think that an alien visitor might be benign, even benevolent. I’d like to read the book!

Hi Cindy, we are so glad you got to see our movie at the Skyway! I will never forget the awe I felt seeing our creation on the big screen and thinking, oh no, how will we know if people liked it? Because it wasn't like the usual audience where we could see people's faces and reactions. And then at the end, to our surprise, all the cars started honking their horns! Oh boy that was fantastic for us.

My book differs a lot from my husband's screenplay. He mostly wrote the movie, but I added a few scenes thinking we needed to foreshadow some events. I used his basic plot as a template and training wheels for my first fiction writing. It really helped. But then I wanted the women to be strong, interesting characters, something there wasn't time for in the movie which really was a buddy film.

Since my book has strong environmental themes (solarpunk is a genre like steampunk only environmental and, well, *sunny*/optimistic,) and I was forced to write about a dairy farm (thank you Tim for forcing me to write about something about which I know nothing) I realized I had to address at least a bit the factory farm issue we have here in Wisconsin. Since it is a feel-good fantasy novel I get to solve that problem in the end in what I hope is a realistic and surprising way.

You'll recognize a lot from the movie but also there is a good chunk that is original, to answer your question. Thanks for your comment!

Hi Kathi! I'm pleased that you find my synopsis full of mysteries. I ask myself what I love in fiction. Regardless of the genre, mysteries or unanswered questions pull me along. A mystery is a promise to a reader that the author makes. The promise is to resolve the mystery in a satisfying, realistic, and possibly a surprising way. So I'm not going to answer you :)
My main character Jim has the same question here. Here's a bit of my book, though some of the formatting won't replicate here:

Toss a dart overboard and it was bound to hit a shipwreck. The lake floor below was littered with wrecks and the ghosts of lost voyagers. A sick chill snaked through Jim's gut. This was called Death’s Door for a reason.
“Seafarers and spacefarers alike face tragedy wherever they go,” Koyper intoned somberly, as if reading Jim’s mind. “This will always be true.”
Jim remembered Koyper’s words at the campsite.
There was ship of ours. It crashed. Thirty-five years ago. Far north from here in Lake Superior...
Jim sat up straighter. “Hold on.” He spoke more to himself than to anyone else and rubbed his forehead, thinking.
Lake Superior? Something tickled at the back of his brain. Tragedy in Lake Superior. Over thirty years ago.
What would the Emissary be doing around Lake Superior over thirty years ago?
And for that matter, what were the three of them doing fishing around here in Green Bay?
Something didn’t add up. Lake Superior might ultimately share these waters in a roundabout way, but it would a real trick to get from there to here. Jim puzzled over this. From here, Lake Superior was a day trip by car. Superior wasn’t exactly right around the corner to Green Bay.
“So, tell me. If your crash was in Lake Superior, what are we doing looking here—”
Jim stopped at the look on Koyper’s face.
Koyper was sitting up straight, his back rigid.
“The signal! Is coming from here! Under the boat.” Koyper pointed down to a spot in the boat next to their feet.

Great work, Holly! Thank you so much for the excerpt. It makes me want to know the rest of the story! 📖