« A review of acid base chemistry | Main | Solubility question »

Why not use melting points or IR to identify methyl orange?

Hello Holly, In a recent OCHEM lab experiment, I synthesized methyl orange, an azo dye. We normally use IR and melting point as ways to identify the final product but this week we didn’t. My TA mentioned we would encounter problems using these two methods on methyl orange, and I’ve been thinking why, but can’t come up with a reason. Why would this be the case? Thank you, LM

Hi Landon,
Good questions! I don’t know off the bat so I will guess. Often certain molecules decompose (burn, basically,) before melting. So the MP’s can be blurry, not well defined. It makes sense if you think about it; instead of one pure compound, you have many, each with their own melting points, so it is a mess.The MP is not well-defined.

I recall I was working with carbohydrates, trying to synthesize new ones in the lab (because I must be some sort of stereoisomer masochist) and they were that way. They decompose. When you burn sugar you get caramel which is a dog’s breakfast of different compounds.

On IR some molecules absorb in certain frequencies so strongly that the whole spectrum gets washed out, so to speak, so you are not able to distinguish various peaks precisely. Or you could just eyeball its color in various pH's, that would give you the identity, (qualitatively, because it is a known acid base indicator, ) but not its purity (quantitatively).

I couldn't resist, but had to look up its IR spectrum just to see. The peaks look pretty distinct to me. It might just be the TA thought you didn't have time to clean a bunch of IR tubes, something practical like that. Who knows. I always loved spectroscopy. It's like seeing what is invisible...hard to explain it but I love it. 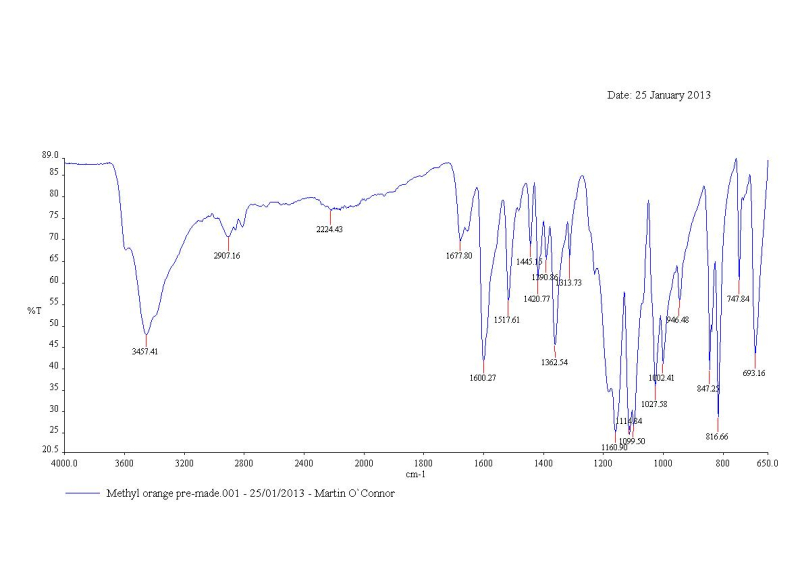 I wonder if you could identify using thin layer chromatography (TLC). Ask the TA. Stay curious.
All the best,
Holly