« stoichiometry with gases | Main | Why isn't HF a strong acid? »

How is serotonin formed from tryptophan?

Can you help me illustrate these reactions?

Serotonin is formed by 2 steps. first is the decarboxylation of tryptophan to form tyrptamine, second is the hydroxylation of typtamine to form 5-hydroxytyrptamine which is serotonin.
JM

It sounds like you might be doing some biochemistry homework, is that right? I'll assume that and I hope you don't get offended if I write below your level of expertise. I'll assume you have a little basic organic chem background, if not, please let me know!

Well, you can't do it without first looking up the structure of the amino acid of your initial reactant, tryptophan, somewhere. I notice that some organic/biochemistry students of mine have difficultly because they are reluctant to look up and COPY the reactant. Perhaps they feel that copying is wrong. It would be, on a test! But in organic chemistry you must learn by coping many patterns of molecules you see, by hand, to get to know why they are distinctive. So, copy copy copy! I don't mean cut and paste electronically, you can't learn anything from that. You have to write these things out by hand, first looking, then not looking. Then look at what is attached to what in your drawing; what carbons are attached to what and in what way?

Now, the answer to your question can not spontaneously arise out of your brain without looking it up, right? So don't feel bad that you don't know the answer immediately. Look it up.

Some biochemistry courses make you memorize all the amino acids commonly used to make proteins, some don't. Even if your course expects you to memorize all the common amino acids, I would still recommend looking up tryptophan and copying it out, just to be sure you get it right.

And then that carbon is also attached to a H, and some distinctive "side chain", which is what makes that amino acid what it is. The double ring system containing N is the side chain for tryptophan.

But since anything with this pattern of an amino and an acid attached to the same carbon is an amino acid, the correct answer it that there are countless amino acids. Some odd ones, not even seen on earth, are formed spontaneously in clouds in outer space. (These are 50-50 right handed and left handed, so not appropriate for living systems, but still, I think it is cool.)

I say this because it is good to be able to recognize the classic amino acid pattern. Look for a molecule with a carbon attached to 4 things: an amino group, an acid group, a H, and something else. Any molecule with that pattern is an amino acid.

I copied this image out of wikipedia, the online encyclopedia, of tryptophan. The carbon attached to the amino group, side chain, and acid group is just shown as a point. The amino group is below this point and the acid group is on the right:

Now, many images of tryptophan in other texts may show the amino group with an extra H and the N will have a + charge, and the acid group will have lost it's H, leaving its electrons behind on the O, giving the O a negative charge. I'll tell you, this really confused me as a young biochemistry student. I knew what an amino group looked like, I knew what an acid group looked like, so why was this AMINO ACID drawn without either amino or acid group?

It took me a bit to figure out that at common pH ranges in the body (approx. between 4 and 8 or so) the amino group and the acid group really do both react to either gain or lose a H+, respectively, and that the image just is being more honest about what form of the molecule you'd likely expect to see in the body. What bothered me is that this thing, that no longer has an amino group (It's an ammonium) and an acid (it's a carboxylate) is STILL called an amino acid. But I got over it. So, this is ALSO tryptophan: 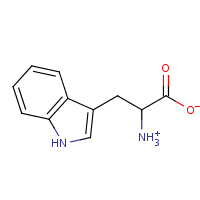 Tryptophan as a zwitterion

This is sometimes called the "zwitterion" form of the amino acid, I think because people like saying the word "zwitterion". No, really, you should find out what form your teacher/employer prefers to see. Many prefer the charged zwitterion since it reflects what you'd find at non-extreme pH's.

If you compare the structures of tryptophan with serotonin, you notice two main differences. Look at serotonin below. 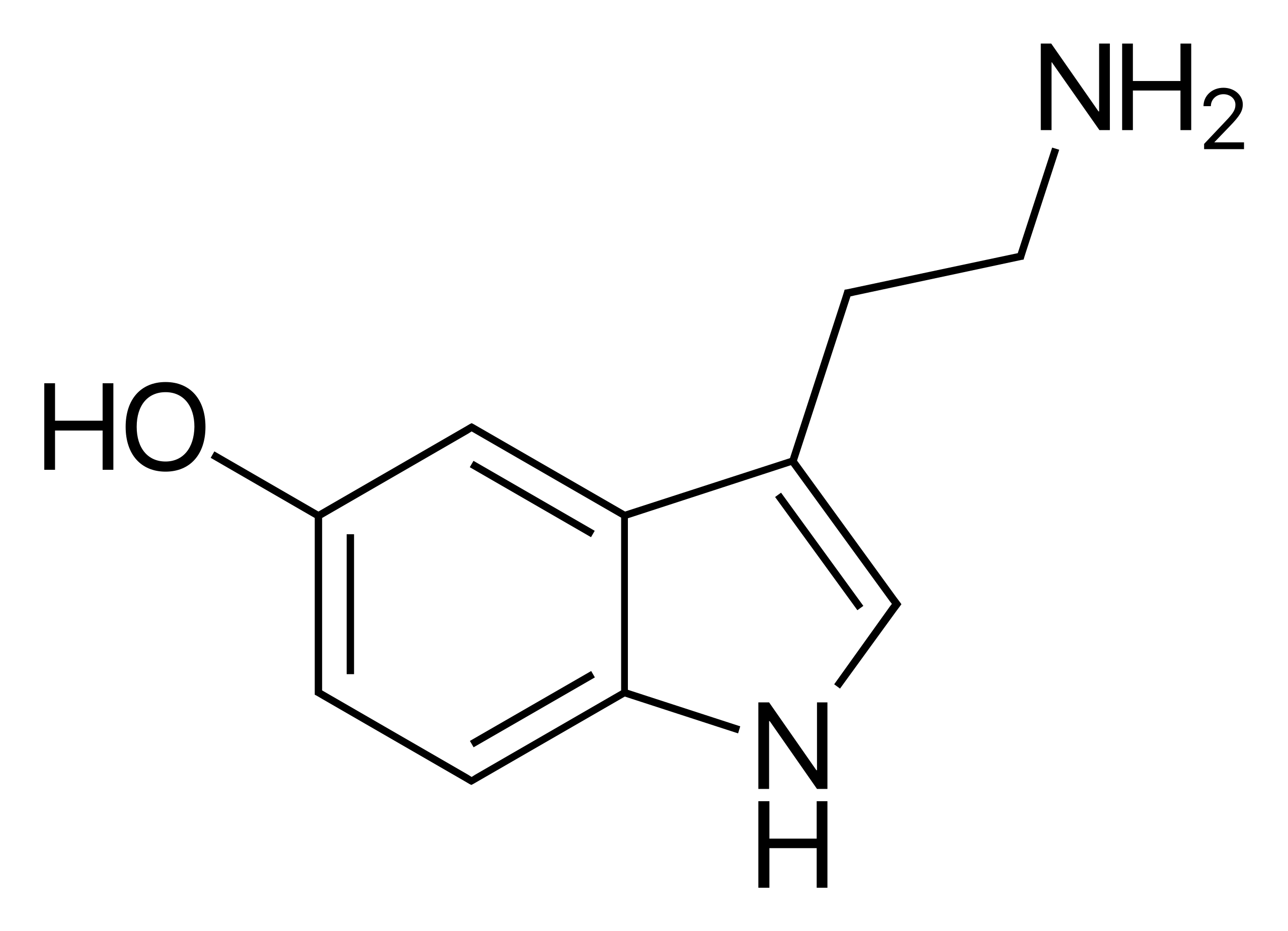 One difference is the OH group out to the left, called a hydroxyl. This is added to tryptophan in a reaction called hydroxylation. The second is the absence of the negatively charged carboxylate at the right (the -CO2-). Just ignore that the amino group isn't charged. Remember, amino groups and acid groups switch back and forth between being charged and uncharged depending on what pH they are in. In an environment where there is an excess of H+, that is, an acidic pH, a H+ will stick to the nonbonding electrons of the N because negative attracts positive and amino groups are bases.

You should also look up the particular names of the two enzymes in the two steps and write them above each arrow.

But please don't cut and paste electronically! Write everything out by hand and look at what is changing in each step.

Here's another image to study, thanks to <a href="http://www.pharmacorama.com/en/Sections/Serotonin_2_1.php">pharmacorama</a>

I believe the "tryptophane" with the e at the end is an antiquated spelling of tryptophan. Don't use that spelling unless you are a 90-year-old biochemist. Also, just ignore the last few steps where serotonin gets converted to melatonin: 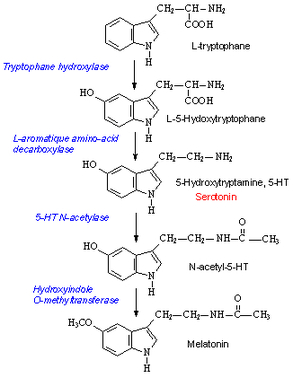 I hope that helps!

PS: for people looking for evidence that tryptophan containing foods boost serotonin, I am sorry, but the evidence is not there. It's a nice story, though, about how eating foods with tryptophan will make you sleepy. It's more likely that eating makes you sleepy. Tryptophan is converted into many, many, many different things, and not just serotonin.