Here are some articles I have written on astronomy.

It’s easier than you think to find your way around the night sky. If your mental map tells you that Sister Bay’s Post Office is across the street from Al Johnson’s Swedish restaurant, you have what it takes. The skill you will need is the same that you use navigating familiar streets.

Now, it is a only a little bit more complicated. Imagine our local streets all stay in place with respect to one another, but rotate slowly around a common point. The post office still would remain across the street from the restaurant. You could still find your way around! Since the stars stay in the same place relative to one another, an old name for them is the fixed stars. Hence the cheesy joke:

These fixed stars will appear to wheel around the north pole, as the Earth turns under your feet, once every 24 hours. As the Earth revolves around the sun as well as rotates on its axis, the wheel of these fixed stars advances all the way around plus a little bit more every night. Just as the sun rises in the east and sets in the west, so do the fixed stars, for the same reason, but the same star will rise earlier (and set earlier) by 4 minutes each night.

And so, every consecutive night we get to see just a little bit more of the wheel in the east and a little bit less of it in the west, at identical times. This is why constellations are seasonal. (Planets and the moon are never seasonal, they are too close to us, so we can’t call them “fixed”. The word planet comes from the Greek word for wanderer.)

Polaris, the north star, is a rather dim and boring-looking star, but in the northern hemisphere, it will stand out as the only star not moving as it sits directly over Earth’s north pole. All the other stars appear to move in a slow counterclockwise wheel around polaris. (The two bowl stars furthest from the handle of the big dipper can be used as pointer stars to find polaris, and it is a handy trick to know, but you will be disappointed if you think polaris is anything worth gazing at.) I recommend starting out learning three bright stars that stand out in the summer sky.

These three form a large, lopsided triangle called the Summer Triangle. The Summer Triangle is not one of the 88 constellations. Any group of stars that isn’t one of these official 88 territories on the fixed star map is called an asterism. For example, the portion of Ursa Major, (the big bear) that most people recognize is called the big dipper. It’s hard to see this ladle shape has arms and legs and a tail. Most constellations don’t look anything like their name. Ursa Major is one of the 88 officially recognized constellations, but the big dipper, which is a portion of Ursa Major, is an asterism.

The three stars making up the Summer Triangle are Deneb, Vega, and Altair. Vega is the brightest star in Lyra the harp, which doesn’t look at all like a harp (I play harp so I can say this) but more like a small, lopsided parallelogram. The brightest of the three is Vega, a blue-white star. Stars really are different colors, though the colors can be hard to see if the star isn’t particularly bright. The hottest burn the bluest, the coolest burn red. Vega’s relatively short distance to Earth, 25 light years, means that the light you view when you see Vega is light that was made twenty five years ago. (What were you doing 25 years ago?) Yeah, that’s far away, but relatively close with respect to most stars in our galaxy. (Speaking of other galaxies, there an estimated couple trillion of them, but all the stars you see with your eyes belong to just our galaxy, the Milky Way. That’s a question I often get. See, that simplifies things even further.)

Fussy old astronomers declaring “Veega is the star, Vayga is the car,” got me in the habit of calling Vega VEE-gah, but both pronunciations are acceptable. With these ancient names I think pronunciation is more a matter of fashion than science. Of the three stars, Deneb is dimmest, which I remember because Deneb and dim both start with D. Deneb is part of Cygnus the long-necked swan, also called the Northern Cross. Cygnus’s cross of stars snakes its way dimly through the middle of the triangle. Altair, the third star, always comes with two dimmer stars on either side of it, equally spaced apart, like stellar saddlebags. Once you see that striking pattern, you will know Altair immediately. Altair is the brightest star in the constellation Aquilla the eagle. I have never been able to see an eagle there. I settle for Altair and its two dim side car companions.

There are so many fun things to find around the Summer Triangle. The little constellation Delphinus the dolphin is a lovely little diamond of stars and lies outside the triangle beyond the line formed by Deneb and Altair. The tail of Cygnus contains a famous double star, Albirio, that when viewed with binoculars or a telescope separates into a striking pair, one vivid blue, one vivid yellow.

For your first astronomical tool, besides a red headlamp to keep you from frying your night vision, I strongly recommend a planisphere. Most natural park ranger stations and nature centers will happily sell you one. It’s basically a paper map with a window that shows you only what stars are visible, so you don’t waste time trying to find ones that are below the horizon. Most cost more no than 20 dollars. You turn a wheel of paper to the current date and time and see only the stars that are currently visible. The brad or rotation piece on the wheel is, of course, Polaris (for planispheres that work on the northern hemisphere. If you happen to be in the southern hemisphere, you will need a southern hemisphere planisphere.) Planispheres are made for different latitudes, so you will want one for the latitude where you will do most of your star gazing. 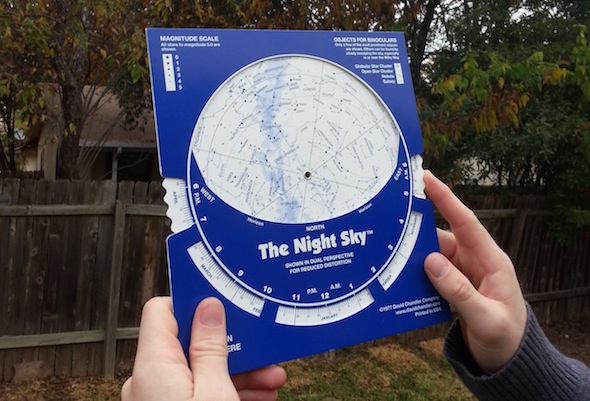 I have plenty of Apps and databases that can tell me where various satellites and planets and Messier objects are. When I started doing astronomy over 25 years ago, no one had smart phones or Apps. Yes, these are useful. I love techy stuff. I swoon over it at times. But the problem with looking up information on your various shiny rectangles is that you can’t immediately view or grasp what what is beyond your virtual screen. Your paper planisphere, on the other hand, lays everything out for you. You can hold the entire hemisphere of the sky in your hands, and not wonder about where everything is off the edge of the screen.

Now, a planisphere can’t tell you where the planets or our moon will be. These bodies are not “fixed.” These wandering bodies trace an imaginary line on across the fixed stars called the ecliptic. There are thirteen constellations in the ecliptic, twelve you may recognize as zodiacal constellations. (The thirteenth zodiacal constellation seems to have been neglected by astrologers, but if you were born in early December as I was, you might be surprised to learn that you were not born under the sign of Sagittarius, but were instead born under the sign of the snake charmer Ophiuchus.)

I try to keep a mental model of where planets are, sort of like nomadic, wandering relatives. Mercury and Venus are easy—they are always next to the sun, and take turns being visible for a while in the morning in the east or in the evening in the west. But when I have lost track, I look their locations up on the internet, typing in “planets tonight” to see where they are exactly now. But I know they will fall on the ecliptic line somewhere, and be in front of one of the 13 zodiacal constellations. So you shouldn’t look for a planet in, say, Ursa Major, which doesn’t lie on the ecliptic.

There is also a winter asterism, the massive Winter Oval, or, as another astronomy joke goes, the Winter Football, prominent in the northern hemisphere’s winter skies. (Featuring the bright stars Rigel, Aldebaran, Capella, Pollux, Procyon, and Sirius.) If you can’t wait to see the winter oval, you can stay up all night, because some of it should be visible in the wee hours of the morning. Use a planisphere to find it.

Holly Phaneuf Erskine is a retired biochemistry professor and medicinal chemist. An avid amateur astronomer, she has set up hundreds of telescopes for star parties for the public over the past 25 years and once had a blast giving shows at Salt Lake's Hansen planetarium.